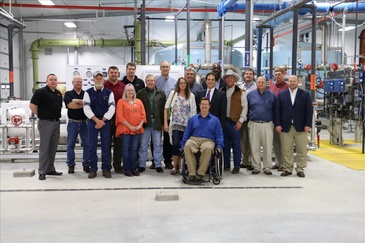 An exciting project for BG’s Water Resources team in recent years has been the formation and design of Public Wholesale Water Supply District (PWWSD) #26.  What began as separate preliminary engineering evaluations for several small water systems in southeast Kansas has become a success story of water system regionalization in the state.

Regionalization, in short, involves the consolidation of water systems or operations. It often results in the formation of a public wholesale water supply district, such as the one BG is currently working on.

The push for regionalization stems in part from simple logistics. Small water systems are facing increasingly greater obstacles to supply and treat water for their users at reasonable prices. More stringent regulations originating from the Safe Drinking Water and Clean Water Acts, for example, create higher demands for technical expertise that many small systems don’t have.

Meanwhile, funding for infrastructure improvements has become more competitive as funds decrease and the need for repairs and replacements increase. If money isn’t coming from the government, it has to come from the users, and systems will be forced to raise rates that are usually higher than rates in larger systems already.

One answer to these challenges is water system regionalization. Although the initial cost for regionalization can be high, this solution is likely to save communities money and keep rate structures stable in the long run.

Yet regionalization isn’t always so easy. Even if communities are interested, there are geographical limitations to consider. If a district is too far away, the cost of piping and other materials needed to transmit water might make the project economically unfeasible. In PWWSD #26, the City of Elmdale was initially included in BG’s regional study, but the cost of building a five-mile transmission main to service the small community of 50 made their inclusion financially unviable without further grant funding.

In addition, three systems must agree to regionalization in order for a project to be eligible for grant funding, and some communities may be hesitant to join. Many smaller communities understandably take pride in their independence, and consolidating water systems can seem like a loss in autonomy. “Water rights are invaluable to a community,” Bruce Boettcher, project manager for PWWSD #26, says. “No one wants to give them up.”

In the case of PWWSD #26, the decision to regionalize had a lot to do with timing. “The atmosphere was conducive for it at that time,” Boettcher says. Water systems in Cottonwood Falls, Strong City, and Chase County RWD #1 were all in need of repairs or replacement and government funds were available because of the push for regionalization. Everything seemed to come together at the right time.

Whenever a water tower goes up, deciding on what symbol or name to paint on the tower can be complicated, especially when multiple entities are involved.  A good indicator of this project’s success and the positive relationship between all communities involved is when the board decided the name on the water tower will say “Chase County”.  “The project is a testament to regional collaboration”, Boettcher says.

More information about the Public Wholesale Water Supply District #26 can be found here.

We see ourselves as a partner, working with you to create a design that resonates with your vision.